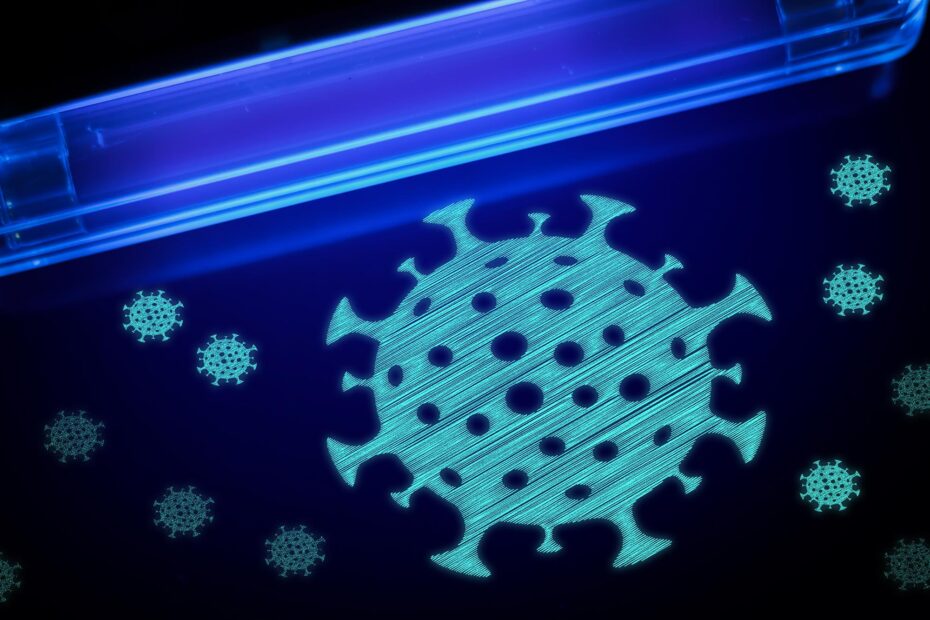 Our Far UVC lamp, Far UVC gate and Biocareuv wand technologies are helping for disinfection of Covid-19 virus. The Covid-19 virus can be spread by breathing, talking, sneezing, and coughing. Coughing and sneezing is an involuntary reflex. A person emits approximately 3 thousand droplets when they cough and an average of 10-40 thousand drops when they sneeze. If this person is infected, the droplets/aerosols contain the covid-19 virus.

Each droplet released by sneezing can travel more than eight meters at a speed of 320 km / h. Speaking in a normal indoor environment, an infected/asymptomatic super-emitter emits a ‘cloud’ of about 6,000 ultra-small sized viral aerosol particles invisible to the naked eye in a 10-minute talk time.

When an infected person sneezes, coughs and speaks loudly, the droplet / aerosol with Covid-19virus is released through the faeces.

It remains contagious on surfaces such as.

Infected aerosol particles below 5 micrometres (µm), which are released indoors by talking loudly, sneezing, coughing and faeces, can remain infectious in the air for 3 hours by being carried horizontally.

Similarly, if the infected person touches his / her mouth, nose or eyes as a result of touching indoor surfaces where infected droplets over 10 µm in size are deposited, the virus is transmitted.

Especially <5 µm small aerosol particles reach the lungs without being filtered through the respiratory tract.

Depending on the number of infected people, the infectious virus concentration changes in indoor air and surfaces.

In the Covid-19pandemic process, indoor environments need to be ventilated (diluted).

The louder it is spoken; the more aerosol particles are released. Please speak in a low voice.

A study conducted in Japan found that “the possibility of transmission of Covid-19 in a closed environment is 19 times higher than in the open air.”

Indoor environments that are not disinfected turn into virus transmission centres.

By disinfecting the infected air and surfaces, virus spread and transmission in indoor environments can be prevented.

In the meantime, it should not be forgotten that super spreaders who show no symptoms at 44 percent in the spread of the Covid-19virus and those who do not show symptoms for 5 days despite the virus have the capacity to spread the virus.

The wavelength of the Far UVC ultraviolet light used to disinfect the Covid-19 virus in indoor air and on surfaces without being infectious is 207-222 nm.

Conventional 230-280 nm wavelength UVC rays are both carcinogenic and cataract genic. High wavelength UV rays are not used for disinfection when people are present indoors.

The high energy from 207-222 nm Far UVC light is strongly absorbed by RNA and DNA bases that cause molecular structural damage through the photodimerization process, damaging nucleic acids and resulting in virus inactivation that cannot multiply microorganisms.

Viruses in indoor air and on their surfaces can be disinfected with the germicidal 207-222 nm Far UVC light.

The system is a promising, low-cost and safe solution tool to prevent and eliminate the viruses in the aerosol in the air released as a result of sneezing, coughing and loud speech and the viruses in the droplets falling on the surfaces within 30 seconds.

207-222 nm Far UVC light is safe for humans, but lethal to viruses and has ‘game changer’ potential.

Columbia University exposed lab hairless mice for 40 weeks to eight hours a day, five days a week, to 207-222 nm Far UVC rays at intensities 20 times higher than they intended to use with humans.

After 40 weeks, it was stated that there were no signs of precancerous lesions or eye damage.

Research conducted at Columbia University found that the 207-222 nm wavelength band of Far UVC light is short enough not to damage human living cells, it can penetrate and inactivate nanometer-sized viruses and bacteria on surfaces and air.

In these studies, animal experiments using a 207-222 nm Far UVC germicidal lamp revealed no signs of cataracts and eye / skin cancer even in mice with ultraviolet radiation.

In a study conducted at Kobe University, Japan, it was found that 207-222 nm Far UVC rays did not damage the skin of people’s dead cells and the layer of their eyes and did not cause skin cancer.

It was observed that 207-222 nm Far UVC light did not reach subcutaneous living cells.

207-222nm Far UVC lamp have been shown not to damage the DNA of skin cells because they only travel up to the stratum corneum, the outermost layer of the skin.

This indicates that 207-222nm Far UVC rays are safe for human eyes and skin. The eyes are where the human body is most sensitive.

Studies have shown that 207-222 nm Far UVC lamp are safe to sterilize viruses on humans.

He used a krypton-bromine (Kr-Br) or krypton-chlorine (Kr-Cl) excimer lamp that produces high intensity Far UVC light with a wavelength of 207-222 nm.

Excimer lamps do not contain mercury and are therefore environmentally safe compared to conventional germicidal lamps.

207-222 nm mercury-free Far UVC lamp have the potential to prevent contamination by disinfecting the Covid-19virus before it spreads and enters the body.

207-222 nm Far UVC lamps are currently produced by several companies around the world.

More proactive measures need to be taken to combat the Covid-19 virus in the interiors of buildings and workplaces, to keep employees, students, customers, patients and others safe, and to manage airflows.

The pictures below show that 207-222 nm Far UVC effectively inactivates aerosolised viruses in the air.

A new tool to control the spread of airborne microbial diseases with Far UVC light.

A company in South Korea states that it disinfects viruses within 30 seconds with 207-222 nm FAR-UVC lamps.

If infected aerosols in indoor air and infected droplets that have settled surfaces can be quickly decontaminated, this would be a real plus.

Newly developed lamps in the interiors of the buildings listed above are used safely and viruses are killed before they get into the air.

Safe overhead lamps 207-222 FAR-UVC can be used in the indoor areas listed above and can be easily installed in existing lighting fixtures.

At airports, it is possible to disinfect the virus that infects the surface of clothes / bags and the virus suspended in the air without harming the health of the passengers. The outline design of FAR-UVC light at the airport, safe for humans, but lethal for viruses is given in Figure 5.

Figure 5.Virus disinfection with 2007-222 nm FAR-UVC lamps on the ceiling

In addition, 207-222 nm FAR-UVC rays can be used to disinfect multi-touched surfaces such as elevators in the buildings listed above, trial clothing booths in clothing stores, escalators and handrails, balustrades and toilets, meeting rooms and living rooms.

In addition, the entrance doors of the buildings listed above should be equipped to disinfect the clothes and bags on employees and customers with 207-222 nm FAR-UVC.

In clothing store booths, within 3 to 4 minutes, with a 207-222 nm FAR-UVC gate, 99 percent of viruses contaminated to indoor air, surfaces and tried-but-left clothing surfaces are disinfected in order to safely test the clothes.

In clothing stores, customers must be assured that their clothes have been disinfected.

It is a promising, safe and inexpensive means of reducing the spread of airborne microbial diseases of continuous ultra-low dose FAR-UVC light in public indoor spaces.

In New York, a trial study of 207-222 nm FAR-UVC lamp application has started to disinfect the indoor environments of public transportation vehicles and subway compartments.

In buildings with central ventilation system.

It should be ventilated with one hundred percent fresh air,

The ventilation air conditioning system should work to refresh the indoor air 6 to 12 times in an hour,

If the recirculated air is to be used for ventilation, it must first be disinfected with 207-222 nm FAR-UVC rays, then mixed with fresh air and then the indoor environment should be given vertically.

Some companies in Japan, the USA and Germany have started to produce FAR-UVC lamps.

Studies have stated that 207 nm FAR-UVC rays can be used in surgical units to relieve infections.

Scientific consensus is that although ultraviolet light of this wavelength is safe, wavelengths above 222nm can have various effects on humans.

If recirculated air is used in the central ventilation system in buildings, it is possible to inactivate viruses by using 254-260 UV-C lamps in the recirculation channel depending on the duct diameter and the amount of recirculated air.

Thus, UV-C rays, disinfection as well as virus reproduction in pre-filtration is stopped.

Broad spectrum germicidal (200 to 400 nm) UV light has been used in hospitals and laboratories for years to decontaminate surgical equipment in an unmanned environment.

Unfortunately, this UV light is also harmful to human tissue and can lead to skin cancer and cataracts in the eyes.

Manual disinfection takes 30-40 minutes, at least 2 personnel are required to work, and chemicals harmful to human health are used.

Many banks abroad use UVC light to disinfect money.

UV-C lamps have long been used to kill bacteria, viruses and mold, especially in the food processing industry.

France Nice airport is disinfected interior spaces with UV-C rays when there are no passengers and employees.

Viruses, fungi and bacteria released as a result of coughing, sneezing and loud speech accumulate indoors, especially on the ceiling.

That’s why some office businesses use UV-C lamps to kill germs that have accumulated on office ceilings.

Lamps placed in high places where people walk around and where they are, emit UV-C light that can inactivate bacteria and fungi and break down viruses after being irradiated for a while.

This system is operated intermittently and when people are absent.

The handrail of the escalator passes through the case as it travels continuously, resulting in a full burst of germicidal radiation.

In a number of businesses to be reopened in the near future, intense UVC rays will be sprayed onto elevator panels, counters, seats and handles of supermarket trolleys.