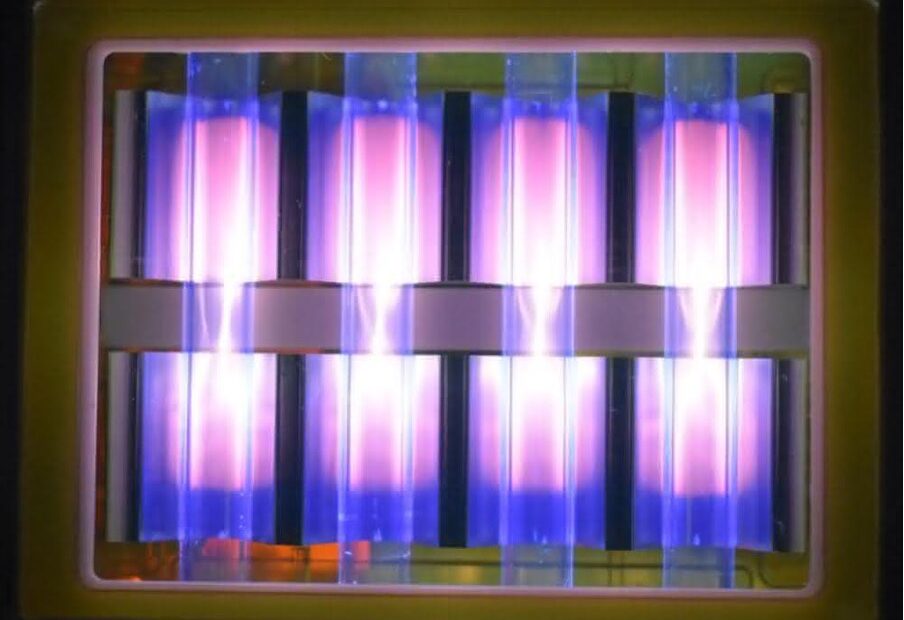 Far-UVC: the UV radiation of the future?

UV radiation is used to kill microorganisms, but it can also harm humans. Professor Hessling and his team from Ulm University of Technology are investigating whether UV radiation in a different wavelength range could also be used in the presence of humans.

Far-UVC refers to the spectral range 200 – 230 nm. In contrast to the 254 nm UVC emission of mercury vapour lamps, Far UVC radiation is supposed to inactivate pathogens without harming humans. Despite previous and promising studies, more scientific and organisational work is needed before Far-UVC could be used on a large scale. In the long term, however, Far-UVC radiation sources such as krypton chloride lamps could replace mercury vapour lamps and open new areas of application due to their lower risk to humans.

Since the onset of the corona pandemic in December 2019, disinfection measures and the emergence of more and more new ideas to contain corona infections have become commonplace around the world. Some of the suggestions voiced are curious or even alarming, and some sound too good to be true. For example, there is currently a debate about whether there is UVC radiation (ultraviolet radiation with a wavelength below 280 nm) that only destroys pathogens such as coronaviruses but is harmless to humans.

So far, UVC radiation is mainly produced by mercury vapour lamps that emit at 254 nm, and it has been known for decades that this radiation has a very strong antimicrobial effect because it destroys the DNA and RNA of the pathogens. Unfortunately, however, this radiation is also very harmful to human cells, so UVC light has so far hardly been used when there is a risk of people being exposed to it.

The idea that there could be short-wave UVC light that damages microorganisms significantly more than cells of higher organisms was first presented as early as 2004 [1], but was initially forgotten. It was not until about 10 years later that the approach was taken up again and investigated further [2, 3], but received little attention outside the scientific community. In recent months, the corona pandemic has brought increased attention to this proposal, as important new applications could be imagined, such as irradiating rooms or lifts even in the presence of people.

But why should the 254 nm radiation of the mercury vapour lamp be more harmful than other wavelengths in the UVC range? As can be seen in Figure 1, the 254 nm emission peak is located near a DNA absorption maximum, which is the reason for the strong antimicrobial effect of this radiation. Compared to shorter wavelength UV light, the absorption of proteins at 254 nm is low.

Far-UVC refers to the spectral range 200 – 230 nm, and the strongest radiation sources currently commercially available are krypton chloride (KrCl) excimer lamps with a peak wavelength of 222 nm. This spectrum is also found in Figure 1. DNA absorption is slightly lower at this wavelength, but the major difference is the significantly higher absorption of this radiation by proteins. The effect of this strong protein absorption can be seen in Figure 2. The human skin consists of several layers. The outer one is the stratum corneum (dead skin cells), which contains a high concentration of the protein keratin. This protein absorbs Far-UVC radiation so that only a small proportion of this radiation reaches the deeper skin layers containing vital cells. In a self-experiment, British researchers irradiated their own skin with a Far-UVC dose of 18 000 mJ/cm2 without observing any permanent skin damage [5]. This value is a factor of 6 000 above the maximum daily allowed 254 nm dose of 3 mJ/cm2.

Even free human cells – without such a protective layer – are said to be more resistant to Far-UVC than to 254 nm, since the DNA-containing cell nucleus is usually surrounded by proteins that at least partially absorb the radiation so that the DNA is exposed to reduced radiation intensity.

The various pathogens usually also contain proteins and yet are not protected against Far-UVC. This is not only because they do not have a protective layer like the stratum corneum, but mainly because they are much smaller. The volume of a bacterium is about a million times smaller than that of a human cell, and the volume of a virus is again a factor of 1,000 smaller than that of a bacterium. This means that there is hardly any Far UVC absorption by proteins and the pathogens are simply irradiated as at 254 nm, damaging mainly DNA and RNA.

The antimicrobial effect of Far UVC radiation should therefore be of approximately the same order of magnitude as the effect of classical 254-nm UVC radiation, as shown in Figure 3 on Staphylococcus carnosus, a non-pathogenic surrogate for the known methicillin-resistant Staphylococcus aureus. The necessary irradiation doses for a 99.9 % reduction (or three log levels) differ by a little more than a factor of 2, i.e. the 254 nm radiation has a stronger antimicrobial effect, but the necessary irradiation doses for 222 nm and 254 nm are of about the same order of magnitude, which has already been observed for other microorganisms.

These properties of Far UVC radiation to act effectively against microorganisms without damaging human skin make experiments like the following possible: One hand is irradiated with a Far UVC dose of just under 100 mJ/cm2 (Figure 4, left). The other hand is not irradiated. Three fingers from each hand are pressed onto an agar plate and incubated for approx. 24 h at 37 °C. The result is shown on the right in figure 4. The result is shown on the right in picture 4, where the agar plate at the top belongs to the non-irradiated hand and the plate at the bottom to the irradiated hand. The number of visible colonies on the lower agar plate is reduced by approx. 1 – 2 orders of magnitude, without the irradiated hand showing any reactions such as reddening. The latter was also not to be expected, as only approx. 2 % of the dose mentioned in [5] was applied.

Status according to studies

All the facts mentioned so far indicate that antimicrobial Far-UVC irradiation in the presence of humans is possible and that this radiation could also be used against coronaviruses. Nevertheless, this approach will not be a quick and large-scale measure against the current coronavirus pandemic for several reasons: This is because, in contrast to mercury vapour lamps, there are so far only very few manufacturers worldwide for Far-UVC radiation sources, one of which is the company Ushio, whose devices have also been used for almost all current studies. When new devices from other manufacturers come onto the market, it must be checked whether they also show no harmful effects on humans. Critical here is unwanted emissions above 230 nm, which could penetrate deeper into human skin and damage cells there [5, 8]. These unwanted spectral components must be blocked with suitable filters.

All studies conducted so far with KrCl lamps and filters against emissions above 230 nm conclude that this radiation has an antimicrobial effect, but does not harm humans [4, 9]. However, there are not yet many studies that have been conducted on human skin, and the existing studies have been conducted on healthy skin over a relatively short period of time. There are no results so far for prolonged use with higher doses or for particularly thin or pathologically changed skin. Nor are there any results for the question of how the skin microbiome changes because of irradiation and whether, for example, more radiation-resistant microorganisms are added and undesirably displace current “skin inhabitants”.

Apart from the skin, it is above all the eyes that are exposed to possible Far-UVC radiation. Based on studies on animals, it can be assumed that the radiation is absorbed by the tear film and outer corneal layer without causing permanent damage [10]. However, studies on human eyes have not yet taken place.

In addition to these unanswered scientific questions, there are also regulatory aspects to consider. The current guidelines for protection against radiation [6] only allow a maximum daily 222-nm Far UVC dose of about 23 mJ/cm2. This means that even if it is confirmed that humans can tolerate higher doses, it will be some time before such irradiations are also permitted.

Far-UVC seems to be gentler for humans than the 254-nm radiation of mercury vapour lamps used so far. However, it is still unclear at present whether Far-UVC is not still associated with health risks.

For organisational reasons alone, Far-UVC can hardly be used to contain the current corona pandemic. Apart from the fact that there are not enough Far-UVC radiation sources, there are no guidelines that would allow their use. However, if the positive results obtained so far are confirmed in further studies, Far-UVC light sources such as KrCl lamps could become the UVC radiation sources of the future and possibly even be used to combat the next pandemic.